J. Bot. Res. Inst. Texas (formerly Sida, Contributions to Botany ("SCB")) has been a source of current research in classical and modern systematic botany for readers throughout the world for 58 years. The journal publishes primary research papers in English and Spanish in fields such as anatomy, biogeography, chemotaxonomy, ecology, evolution, floristics, genetics, paleobotany, palynology, and phylogenetic systematics. Coverage is global: it is not restricted to any geographical area, and papers have been contributed from around the world. J. Bot. Res. Inst. Texas is published twice a year, usually with  250-350 pages per issue. J. Bot. Res. Inst. Texas currently has subscriptions on a worldwide basis; approximately 40% are foreign (about 35 countries) and 60% are domestic (USA).

Each issue contains articles on various groups of plants such as palms, ferns, lilies, irises, legumes, primroses, morning-glories, bromeliads, four-o'clocks, daisies, buttercups, roses, agaves, mustards, cacti, orchids, mints, wildflowers, and herbs. Papers appear in English or Spanish, with abstracts in both languages. Abstracts in additional languages, especially those of the area in which the research was conducted, are encouraged. All papers are peer-reviewed and are frequently illustrated with maps, line drawings, and full color photographs. Each issue also includes short communications on floristic discoveries, book reviews, and notices of new publications. Recent papers have included:

History of Sida, Contributions to Botany

The journal was previously named for Sida, a genus in the cotton family (Malvaceae). The name was chosen by Lloyd H. Shinners because it belongs to a plant group that is found around the world. The word sida may come from sid-, one of the Latin words for star.

Shinners began privately publishing Sida, Contributions to Botany in 1962. William F. Mahler, Director Emeritus of BRIT, inherited this journal in 1971 and continued publication through volume 15, 1992. Published by BRIT since 1993, the journal continues the twice-yearly, multiple topic format with Barney Lipscomb as Editor-in-Chief and Kimberly Shay as Assistant Editor. The journal title was changed to Journal of the Botanical Research Institute of Texas (commonly referred to as "JBRIT") in 2007. 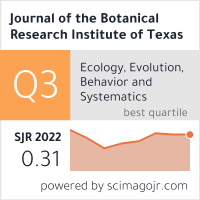 The readers of Journal of the Botanical Research Institute of Texas and our Botanical Miscellany include those with an interest in botany, classical and modern taxonomy, horticulture, and plant ecology. Subscribers include professionals and keen amateurs, students, teachers, gardeners, researchers, field botanists, academic institutions, libraries, museums, nature centers, botanic gardens, arboreta, and various government agencies.

"I am really pleased to see that [it] is becoming the journal of choice for shorter more or less classical taxonomic work. I really enjoy receiving it."
- Richard Spellenberg, New Mexico State University, Las Cruces

"Put me down as one very satisfied subscriber and reader, and accept my congratulations on a very, very difficult job well done."
- Neil A. Harriman, University of Wisconsin, Oshkosh